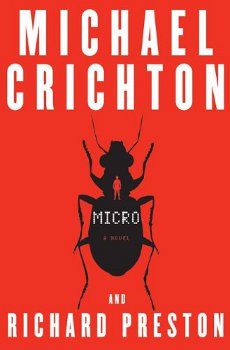 Michael Crichton's last book following his untimely death in 2008 is Micro. But because of his death, Crichton was unable to complete the novel leaving the job up to Richard Preston. Preston has written a number of non-fiction books, most notably The Hot Zone and The Demon in the Freezer. I have to offer some serious respect to Preston for taking on such a task of completing a Crichton book.

Micro follows a group of Harvard scientists to Hawaii where a new technology company Nanigen is developing some extreme tech. Using this new technology, the scientists find themselves shrunken down to microscopic and forced to battle their way through the Hawaiian jungle. A Hawaiian jungle full insects and predators no longer one 'boot stomp' away from disposal.

This is vintage Crichton. So vintage that it regretfully identified a classic plot formula in much of Crichton's writing:

I'll be the first to admit, this formula makes for great reading. And while Crichton's stamp is clearly on this book. I couldn't help but feel this wasn't him writing. What Pirate Latitudes taught me is that it appears Crichton does quite a bit of refinement from first draft to publication. There must be some editorial loops that occurred for his previous novels. The character interaction and grandiose personalities sound like Crichton selected, but Preston created. So while reading this book it felt less like a Michael Crichton book and more like what I read from a Douglas Preston (Richard's brother) and Lincoln Child book.

Was this book a good read? Yes. Did this book hold my attention? Yes. Would you recommend this book? Yes. How does it rank among Crichton's novels? Near the bottom.

The following does contain a number of spoilers, please skip to comments if you do not want to know these.

I've always been to Crichton's books for two primary reasons:

The problem with Micro is that it contains neither of these. The technology that supposedly shrinks things is a powerful magnetic field called tensor fields. These fields are "explained" by a cryptic message from dug up Manhattan Project-esque research. After much hand waiving, we are supposed believe this is real. It appears, the 'science' of the small natural world is chosen as the meat. This was disappointing. Thinking about Jurassic Park, we learned about genetics and cloning. The threats of live dinosaurs was also included, but only as defensive approaches or as the archaeologist stare in wonder. While still interesting, it was disappointing.

The characters and interactions seem larger than life and a bit unbelievable. The authors also do something that I'm not sure I've read from Crichton before. For some reason, they want you to get emotionally vested in certain characters only to rip them out from under you. It surprised me the pin-point focus on certain characters and then how expendable they were, this felt like a ploy rather than good plot flow.

Characters again weren't very Crichton-esque either. The reason I say 'Crichton-esque' is that I can directly compare a character. Vin Drake's complete caricature of a person constantly made me think about Dr. Frock from Preston & Child's Reliquary. Reliquary is at the very bottom of my list of Preston & Child books because of things like this, and Micro has a couple of these types of characters and it's annoying. And I won't even bring up the fact that one characters has a "I'll explain the entire history of Nanigen in 3 pages right before the end of the book when a couple people are dying instead of immediately doing something to save their life..." moment.

Even with those annoyances, it was a decent book. Again 2.5 out of 5, so worth grabbing at the library but not something to drop everything to go read. I find it sad that Crichton's normal process couldn't be completed for Micro because there was a ton of potential here. I think I'm going to have to pull out my old copy of The Andromeda Strain, and re-read that gem...

Being that this is Crichton's last book I figure I'll rank them in order from best to bottom. Books not on this list means I haven't read them.

I think I used -eque too often in this review...