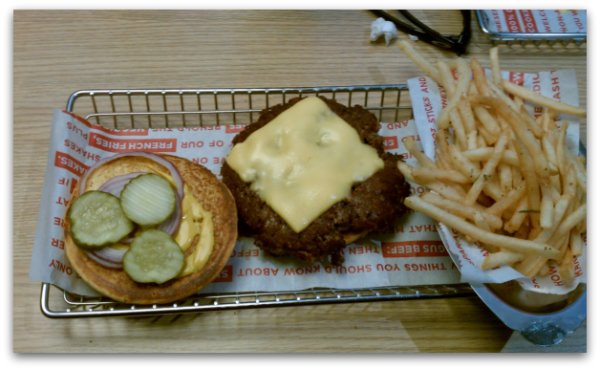 Smashburger is a newcomer based out of Denver, Colorado. They, like most of the places I've listed, want to build a better burger. Smashburger, originally IconBurger, derives its name from the process they use of smashing a ball of ground beef to form the patty.

According to them, everything is fresh. And for the most part, it tasted that way. The meat of the burger tasted well seasoned, but it had a crush around it that you normally find in frozen burgers. The outside of frozen meats tend to crust because of the extra time needed to fully grill the burger, Smashburgers have this same crust but might be more from their process rather than the meat itself. The bun (they call 'Artisan') was very good. Well toasted and a great flavor that differs from the standard bun. 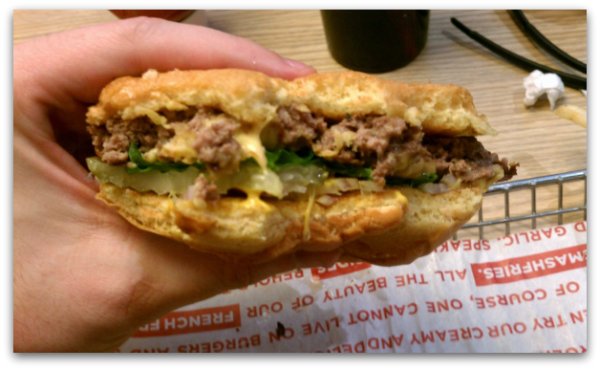 As you can see above, there was no lettuce for my order. Not sure if that was a mistake but my wife had lettuce she didn't mind giving to me. The lettuce though was Romaine, which doesn't go well with a burger. It's softness and toughness do not compliment the burger well. Onions and cheese were nice, but the pickles were excellent. Not sure if it is the brand or what, but the pickles here were probably the best I've had so far.

Smashburger doesn't throw any special sauce on the burger, just standard yellow mustard. The fries are 'Smashfries' which means nothing since you cannot smash them. They are standard frozen bag fries, but are seasoned in a wild way that made up for the frozen fry package. But it still made you wonder how much better they could have been if it was fresh potatoes.

All in all, I wrestled with giving Smashburger a 3 out of 5, but I couldn't honestly go above a 2. With standard condiments, bad lettuce, and meat that felt frozen (even though it's not); I can't give them a better score. I can't really justify much of a return visit, although they do serve excellent milkshakes and fried pickles.

Has a Smashburger moved into your town? What did you think?